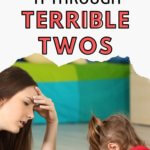 Parenting strategies for difficult toddlers can make or break you! Two and three-year-old children are learning how to be independent and say no. This can result in tantrums, out of control behavior, and plenty of power struggles!

Teaching children how to control their emotions and behaviors is one of the most important things a parent can do. However, you are probably wondering:

The Struggle of Finding a Parenting Strategy to Parent a Toddler

When my son was three years old I often felt like he was out of control. I worried that I was doing something wrong. This led to me feeling confused and scared that I was a bad mom.

The confusion came because my first son had been “easy.” He rarely threw temper tantrums and was an avid rule follower. I assumed that his good behavior was because I was an exemplary mother. (Wouldn’t that have just been so simple and easy!)

And honestly, I am so grateful for both of their unique personalities and world views.

That being said, having a child who is constantly asking, “why?” Or spending the majority of his time trying to find a path of his own – to do things his own way… Well, that can feel challenging!

And if you are reading this article, then I am guessing that you are in the midst of that challenge, so let me share from the other side. Not that we never have power struggles now that he is older, but we have learned to navigate them better.

I do believe that there is hope for having a much easier time even at the stage that you are in right now with your toddler. With the right parenting strategy, it is possible to have fewer tantrums, less out of control behavior, and more happy, calm, loving moments with your toddler.

There’s not much that my youngest son loved more than to say, “NO” when he was two. When he was three, it graduated into, “You Can’t Make Me!” He and I have had some all-out battle of wills! He could throw a temper tantrum for multiple hours without stopping. (Still can if I let things get that far…)

What I had to learn was that getting into a power struggle with him would always equal both of us losing.

The frustrating part of this though, is that it’s practically impossible to avoid power struggles with 2 year old kids, 3 year old kids, and even 8 year old kids. You have to ask them to do things that they won’t want to do occasionally. (You know, like brush their teeth, or put their shoes on…)

The ironic thing about this whole situation for me is that I am a trained family therapist. I had specialized in Parent-Child Interaction. I had a lot of knowledge, resources, and skills.

The truth is, I had gotten so lured in by how “easy” parenting was with my firstborn that I put aside all of those skills and was just floundering.

When I realized that I could use the skills that I had previously taught to parents, it was like a huge ah-ha. (Or a massive Duh! – depending on how gracious I am feeling towards myself at the moment…)

The Search for Parenting Tools for Difficult Toddlers

I ended up sitting down with all of my old textbooks, video parenting courses, and notes and pieced together a strategy that actually works really well for my stubborn, authority-questioning, strong-willed son and me (who has a few of those traits as well.)

Is Giving Choices a Good Parenting Strategy for Difficult Children

One of the old parenting videos that I had been trained in was set up like a karmic bank. As a parent, you provide a ton of choices throughout the day: Do you want to wear the red pants or the green pants, do you want oatmeal or cereal, do you want to read or play blocks, etc.

Then when you really need your child to do something, the concept was, that you had built up enough “credit” in your child’s bank that you could call in the favor for them to do what you were asking.

That concept resonated as partially true. I felt like it was vital to give my child as many choices as I possibly could. (And I still think this is a very important parenting strategy.)

But, the problem is, that no matter how many choices I gave my son, I never seemed to build up enough credit to get him to happily comply when I really needed him to do something.

The Benefits of Child-Led Play

Another important parenting strategy for difficult toddlers that I used to teach with my clients was that you needed to spend at least 20 minutes per day with your child giving them your undivided attention. This time should be child-led, meaning that they can choose what you do (as long as it is safe and within reason.)

The idea with this parenting technique is that by spending those really focused moments with your child, you develop a credit so that when you need your child to do something, they are willing to comply. (Sound familiar?)

What Actually Works to End Bad Behavior in Strong-Willed Toddlers

In the end, what actually has worked was combining those two methods. On their own, neither method really worked for my extra-stubborn kiddo. But, if I give him 20-30 choices each day, spend 20 (or even 10) minutes playing with him doing whatever he wants, magic happens. His tantrums decrease, his out-of-control behavior disappears, and he is so much more willing to do what I ask when I ask.

You might hear that and feel like this sounds exhausting. But the truth is, it actually takes less time and effort than going through multiple tantrums per day over every task.

How to Give Your Toddler Choices as a Parenting Strategy

I have become quite strategic about choices. I rarely ask my son to do anything without giving him an option.

For example, if we are getting ready for school and I know that he struggles with getting his shoes on, I will ask him, “do you want to put your shoes on before breakfast or after?”

He even has two toothbrushes so that I can ask him which one he wants to use.

Providing him with all of these choices gives him that sense of control that he needs in his life. It allows him to feel like he is in charge of how his day goes.

How to Spend Child-Led Time with Your Kids

The other aspect of this technique is spending those 10-20 minutes of really focused time with your child. To be honest, I feel like we are doing pretty good when we get this in 4-5 times per week. There are days that there just isn’t time.

When I find that my son is throwing more tantrums and acting out of control, I increase the amount of time, or number of times, that I spend with him.

I also found it really helpful to spend more time doing this when we first started (which was when he was around 3.5 or 4.) Putting in that time upfront enabled me the ability to take a day off now and then when needed.

So, in recap, provide your child with 15-20 choices each day and spend 10-20 minutes playing with your child doing whatever they want. I know that sounds simple but it really does work!

I know I mentioned it earlier, but if you want to dive deeper into these strategies, they are both covered (and a lot more) in The Be Heard Method.

I hope this is helpful and useful. Know that you are not alone and that even though it feels so hard right now, better moments, hours, and days will come.

Sending you love and light,

P.S. I also have a free Parenting Resource Library full of printables, worksheets, and activities that you might find helpful in your parenting journey. You can access that by entering your email below.

How to Use Playfulness to End Tantrums

193shares
Tired of Your Kids Not Listening?Yes!