How to Make a Calm Down Kit 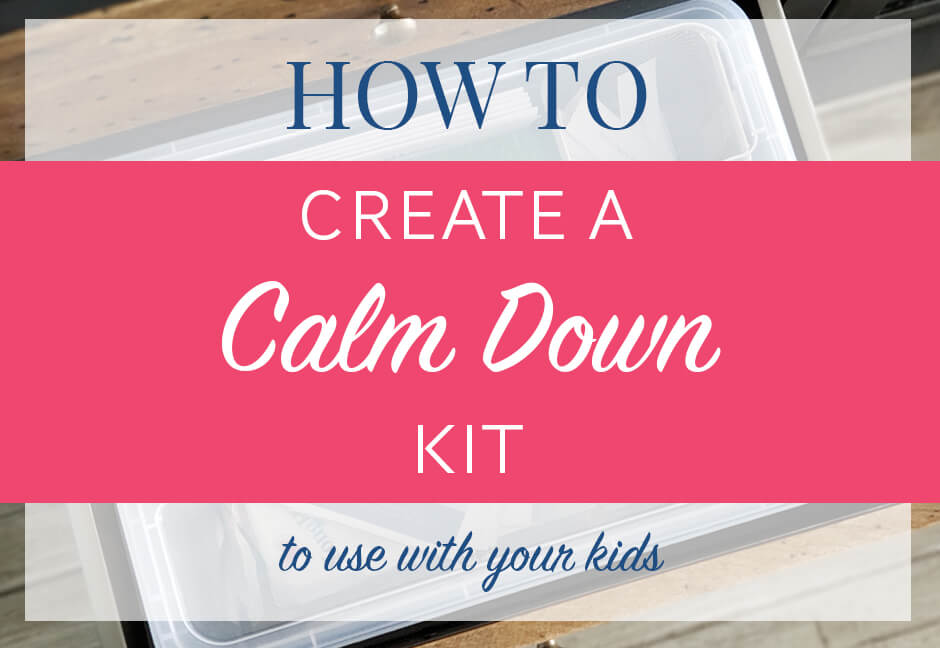 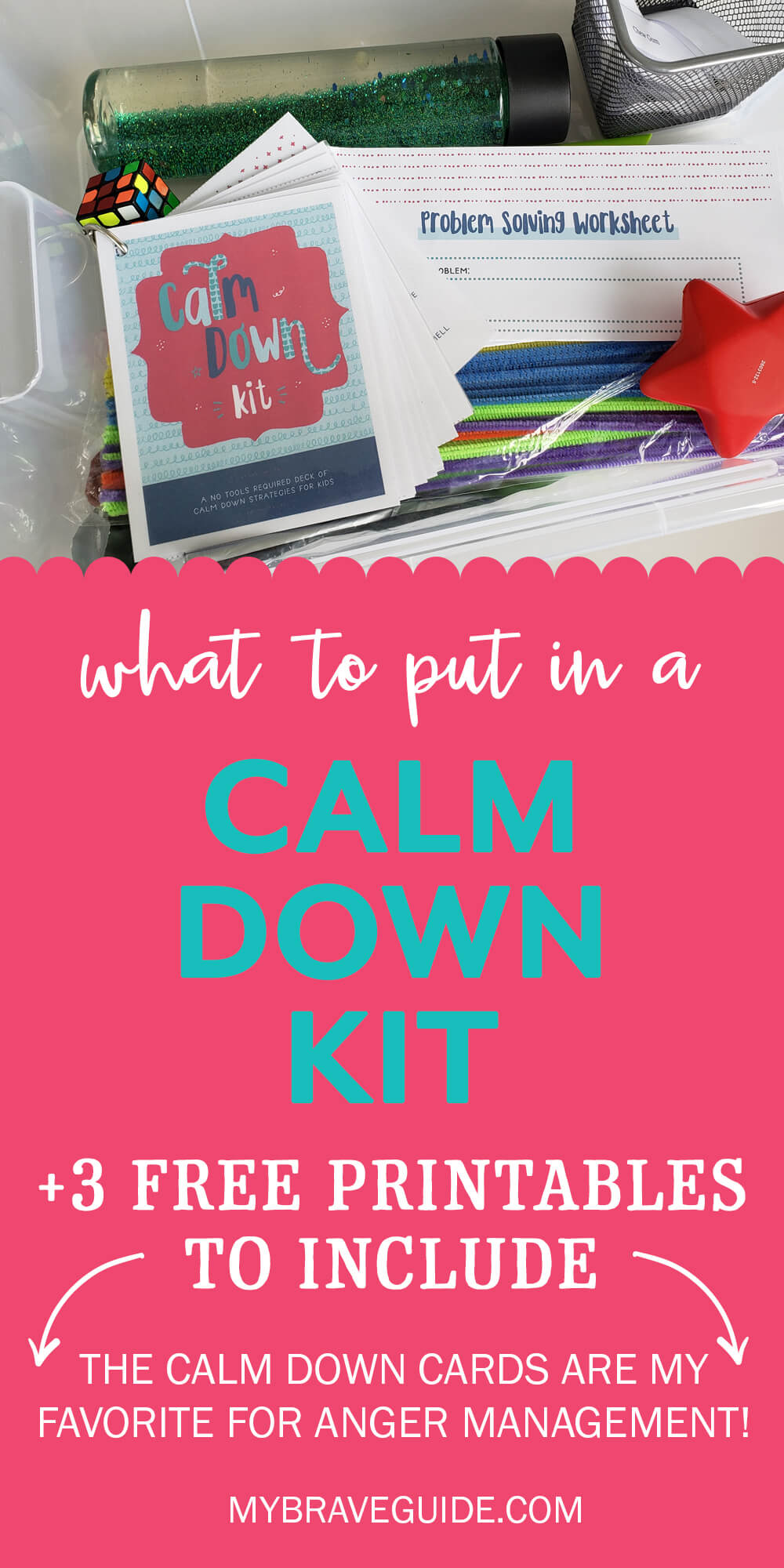 Looking for Your 3 Free Printables to Include in Your Calm Down Kit?

Find them, along with lots of other great resources for free in the Parenting Resource Library. Sign up below!

Subscribe today for access to all of my free downloads, printables, worksheets and more so that you can help your child manage their emotions better!

My family and I are preparing for foster children once again, after a bit of a break. As we prepare, I am diligently working on filling up my parenting resource “toolbox” so that I am prepared for all of the big emotions and behaviors that come with foster care. (Both from the foster kids and from my own bio-kids.)

One of my favorite resources that I have been excited to put together is a calm down kit. These kits are fun little boxes or bins full of activities that kids can use or do to help them calm down. (See below for a full list of what I include in my calm down kit.)

The great thing about calm down kits is that they are pretty universal when it comes to what emotion or behavior you are trying to address. I have used my calm down kit with my kids for anxiety, for tantrums, for boredom, and even just for coping-skills practice.

What is a Calm Down Kit

If you aren’t familiar with the concept of a calm down kit, let me illustrate with a story. The other night, my son was feeling frustrated and bored. (He was out of device time for the day and not happy about it!) He was starting to act out by trying to pick a fight with his brother and starting to get a little aggressive. I tried asking him to calm down which got me a really mean look and some serious eye-rolling. He continued to escalate so I knew it was time to deploy the calm down kit.

I could tell that he needed to release some of his pent-up physical energy. (This is a common source of his acting out.) I tried asking him to go jump on the trampoline, which again earned me eye rolls and what I am sure he was hoping were scary, mean looks. I then decided that we needed to get creative and engage him on his level.

In this situation, I decided to handpick the activities for him from the calm down kit as I could tell that he specifically needed to release all that energy. I then proceeded to walk him through 5 exercises from the kit that were all designed to provide physical stimulation and to burn up excess energy.

The magic of the kit, in this instance, was that it gave me a concrete, pre-thought-out, parenting tool to turn to, instead of falling into frustration and anger. It allowed me to engage my son in the midst of his acting-out and provide him with positive attention. The activities helped to redirect his energy so that his behavior was regulated, and he began to calm down.

How to Use a Calm Down Kit

There are a few different ways that we use our calm down kit in my house. The first way is as I described above. I hand-pick pre-thought-out activities that are specifically targeted to the behavior or emotion that I am trying to address. The kit is so helpful as it takes a lot of the emotion and guesswork out of my reaction to their behavior. Instead of feeding off of their negative energy and spinning the situation into a power struggle, a fight, or a melt-down, I am able to stay calm and rational because I have already thought through situations and my responses to them.

The second way that we use our calm down kit is to have it be parent-led but self-guided. If I see one of my kids needing to calm down, I bring the kit to them and allow them to pick 2 calm down activity strips (see the photo below). They then choose the activity that they like best. After they have done this activity, they can go on to choose another activity if they want.

The final way that we use the calm down kit, is to have it available and free to use anytime they choose to on their own. The only rules around this are that they need to put anything they take out back and treat things with gentle respect. 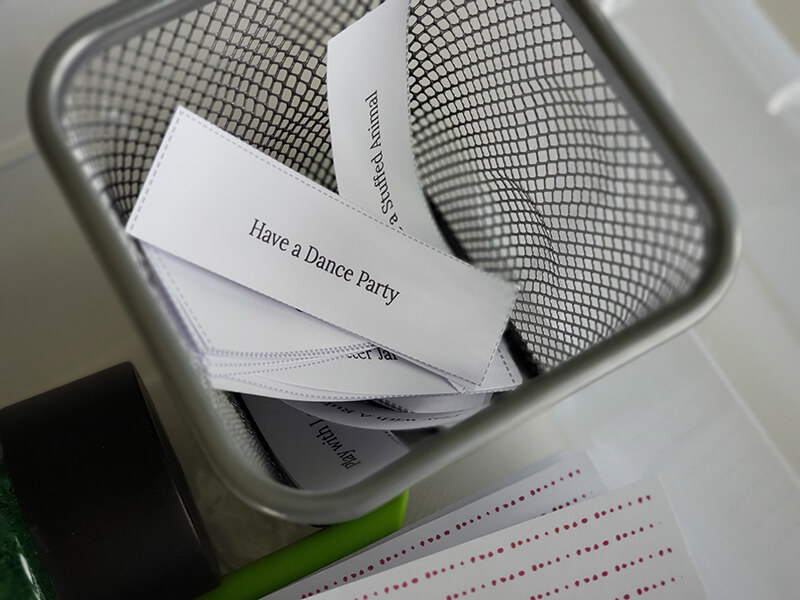 You may be reading this and thinking, yeah, my kid would never use that in the midst of a tantrum, meltdown or anxiety attack. Truth be told, if I let the situation go to full-blown melt-down status, my kids don’t want to use it either and I have to get really creative on weaving activities in, in such a way that they don’t notice. (By the way, if you are looking for resources for stopping tantrums, check out my 6 part series on stopping older kid tantrums here.)

What works much better, is to provide them with the calm down kit at the first signs of trouble. This takes a little reflection and work on your part, as a parent. You need to analyze your kiddo and find their triggers. Are there situations that set them off? (Like getting ready for school or having to run errands.) Are there small behaviors that are warning signs that worse behaviors are coming? (Like a whining voice or eye rolls.)

It is also helpful to really become aware of your own reactions in response to your kids. If you notice yourself starting to get frustrated, angry, or confused by their words or actions, it is probably a good time to deploy the calm down kit. Remember, the kit isn’t just for your kids, it is also for you to use as a parenting tool!

How to Create Your Own Calm Down Kit

If you are ready to create your own calm down kit, I would suggest thinking through what types of calm down activities you think will work for your kids. You can find a really helpful list of 75 Calm Down Activities in this post here.

You may even want to create the kit with your children. My youngest son and I created our kit together. It was very helpful to hear his input on what he thought would work, and what wouldn’t. Letting him be involved also really got his buy-in on using the kit of his own free-will.

There is no one perfect way to create this kit. It can be as simple or as elaborate as you want to make it. (Although, I would suggest that you have more than 10 activities available for the sake of variety and for addressing different situations.)

Here is What I Have in My Kit

Calm Down Activity Strips in a small container (You can find a printable copy of these in the Parenting Resource Library here.)

Calm Down Deck (You can print a free mini-version of this from our parenting resource library or check out the full Deck here.)

Straw and Marble (for blowing around a table)

Balloons (for keeping up in the air)

A Hippity Hop (bounce on ball – I keep this in the garage since it doesn’t fit in the kit.)

A Trampoline (out in the yard) 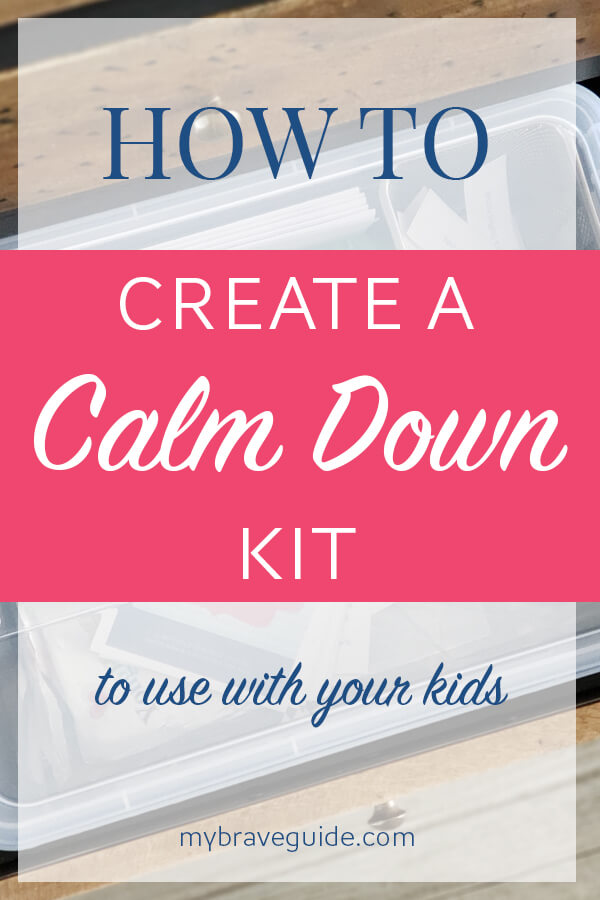 Looking for Your 3 Free Printables to Include in Your Calm Down Kit?

Find them, along with lots of other great resources for free in the Parenting Resource Library. Sign up below!

Subscribe today for access to all of my free downloads, printables, worksheets and more so that you can help your child manage their emotions better! 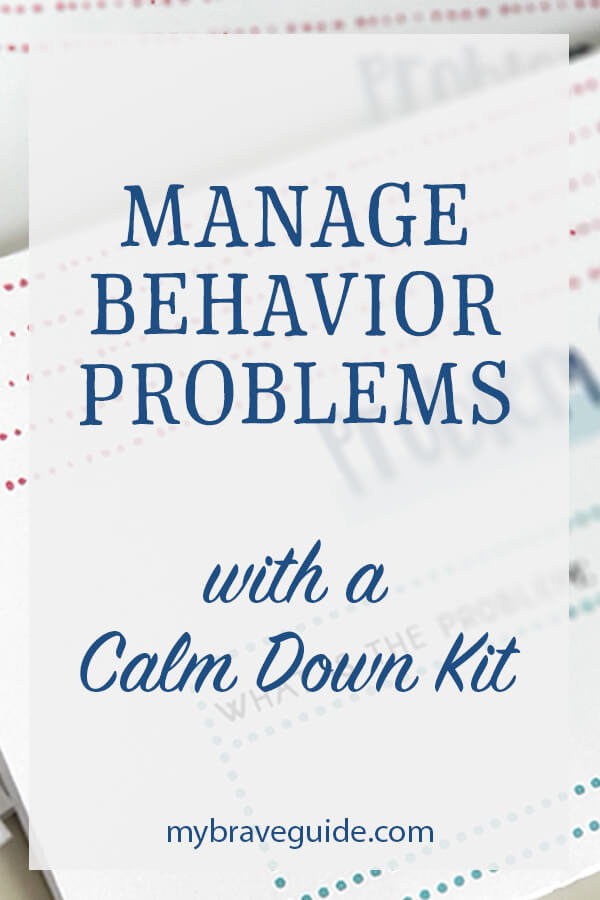 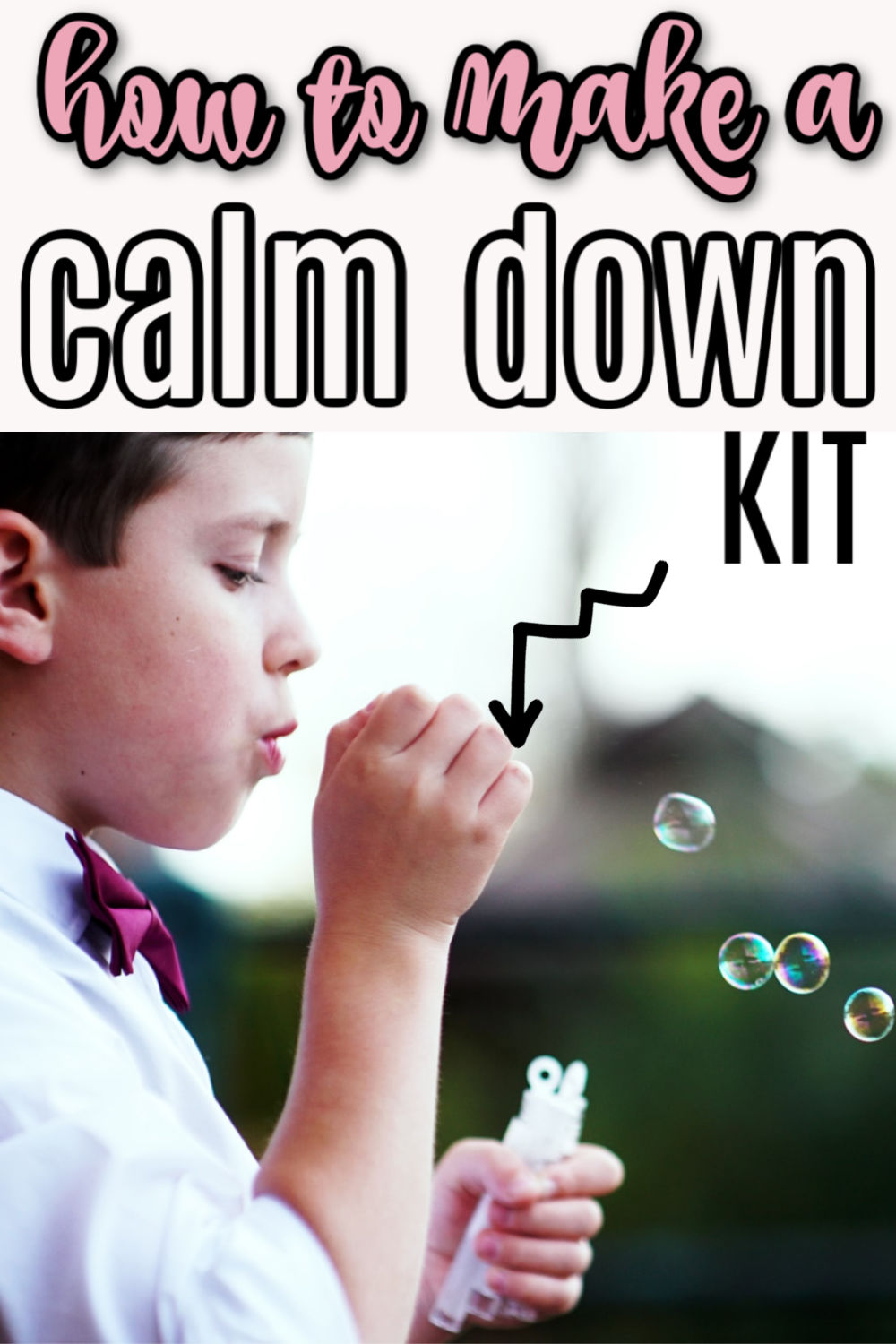 You're In! (Check your inbox for the super secret password.)

Save 40% on the Virtual Calm Down KitLEARN MORE

We pinky promise you and your kids will love them!

Thanks... Check Your Email for Login Details!